Careful consideration needed when dealing with increases to fuel levies

On 21 February Finance Minister Malusi Gigaba will deliver his Budget Speech in Parliament. Part of that speech is expected to include an announcement on increases to the General Fuel and Road Accident Fund levies, both of which are included in the price of petrol and diesel. With a budget shortfall of around R50bn in 2017, this may seem an ideal mechanism for the minister to source additional revenue.

However, we urge government to be careful in determining future hikes to these taxes, and must consider the impact these increases have on especially the poorest of the poor in the country.

It will impact the poorest of the poor hardest, as they mostly rely on public transport. Road users in general are already under enormous financial strain; a big increase to these levies will certainly place an even greater burden on them

Currently the General Fuel levy is R3.15 and the Road Accident Fund levy R1.63. Together these levies total R4.78, which roughly makes up 33% of the total cost of a litre of fuel.

Clearly the rate of increases in the levies outstrips inflation considerably and motorists and road users may well feel aggrieved that they are seen as an easy source of revenue, at a time when they are having to tighten their belts. For this reason we are advocating for increases to the levies which are in line with average inflation of around 6%.

Should this happen the combined levies will cost R5.07/l, which is a 29c/l increase to the current levies.

Any increases higher than inflation will constitute considerable rises to the fuel levies; we cannot support such hikes and urge government to make their decision carefully, and with the interests of all road users in mind.

The graph below illustrates the increase in fuel taxes and levies between 2013 and 2017 compared to the average Consumer Price Index (CPI) inflation for each year. Figures for 2018 are estimates based on January 2018 fuel prices, and estimates of the projected average CPI at the end of the term. These figures will vary depending changes to these numbers 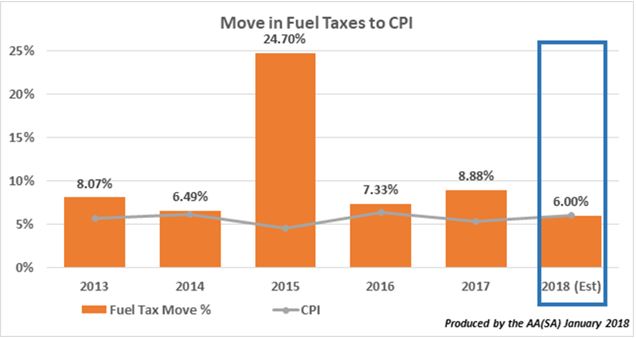 Graph 2 indicates the historical increase of the combined General Fuel Levy and RAF levy between 2013 and 2017. Figures for 2018 are estimates based on a projected average inflation for the year of 6%. 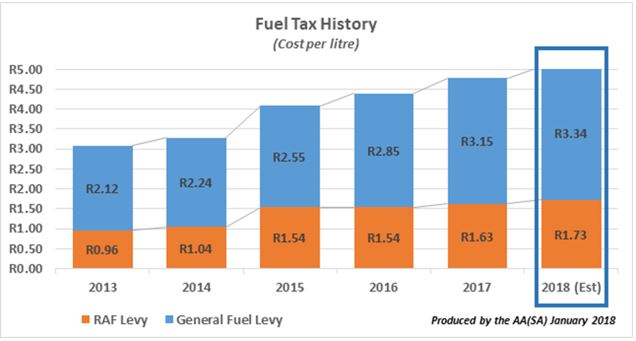 NOTE: Money collected from the General Fuel levy goes directly to the national fiscus and can be allocated to any item Treasury sees fit, not necessarily items transport or road related. The RAF levy is paid to the RAF and is used to compensate victims of motor crashes.

Brace for another fuel hike

Motorists to accommodate a series of fuel price hikes

The relief of recent months is unlikely to be sustained...

Petrol will rise a modest four cents a litre, but diesel users will pay up to 26 cents more, with illuminating paraffin set to rise by 18 cents.