Regulation 250 comes into effect on Thursday, 11 May

This week South Africa will become part of the first FIA/JCDecaux worldwide outdoor communication campaign dedicated to road safety. Billboards displaying various messages will be activated at different points throughout the country. The campaign was launched in Paris on 10 March by the President of the Fédération Internationale de l’Automobile (FIA), Jean Todt, and co-CEO of JCDecaux, Jean-Charles Decaux.

Through its tagline “Sign up, stay safe, save lives”, this campaign underlines the role that anyone and everyone can play to make roads safer for all users. Members of the public are also invited to sign a ten point manifesto, which calls on all governments to make road safety a priority, and introduce effective legislation on key risk factors on the road. The manifesto is available at http://www.fia.com/3500lives.

Locally the campaign is split in two. ‘Stay Bright” focusses on pedestrian safety and features the athlete Haile Gebreselassie, while the ‘Don’t Text and Drive’ portion of the campaign features singer Pharrell Williams. In South Africa almost 40 percent of all annual road fatalities are pedestrians.

The purpose of the ‘Stay Bright’ campaign is to encourage pedestrians to make themselves visible at all times. This is especially relevant in South Africa now with the winter days getting shorter, and the nights getting longer.

Supported by famous ambassadors, the campaign promotes simple and universal messages to save lives on roads. Road crashes are responsible for 3,500 deaths a day worldwide. In South Africa around 13 500 people die on the country’s roads annually, or 36 daily, one of the highest in the world.

The campaign rules are embodied by 13 famous ambassadors:

Politician: Anne Hidalgo, Mayor of Paris and President of the C40

Translated in 30 languages, the campaign #3500LIVES is now live in 30 cities worldwide and will be rolled out in more than 70 countries by the end of 2017. It is estimated that during the launch phase the campaign will be seen 1 billion times. 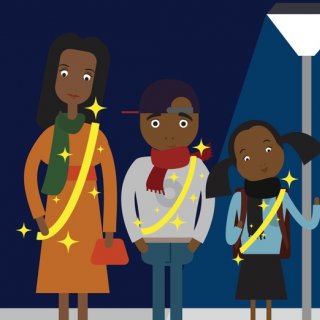