What safety features should you look for in a car?

It’s a new year and many school leavers will be going to tertiary institutions. Graduates are also starting their working careers. As a result, parents and young people will be looking to buy a first car.

While aspects such as looks, specification levels and fuel consumption will undoubtedly play a role in the choice of vehicle, safety features should also be a key consideration.

In 2016, the AA published its first entry-level Vehicle Safety Report, highlighting the limited safety features available on entry-level vehicles. This report seeks to identify and compare the standards of safety equipment present in vehicles under R160 000. The second report  was issued in October 2017.

In addition, the AA, in partnership with Global NCAP, launched #SaferCarsforAfrica in November. This outlines the safety ratings of five of the most popular entry-level cars available locally. The AA believes the key message from these results is that, contrary to popular belief, an affordable car can also be safe.

The motivation behind #SaferCarsforAfrica project was to obtain safety ratings for local vehicles, similar to what is already being done in the USA, Europe, Australia and Latin America and Asia. This will ensure  potential buyers can make informed choices when evaluating a vehicle on the safety features it offers.

So what safety features should you look for in a car, particularly if you’re shopping on a budget?

There are certain safety features on vehicles we take for granted, but if they are not present could have dire consequences...

The AA would like to see more people considering safety features when buying a vehicle. The Association believes this is particularly important in the entry-level market as lots of the people buying or driving these vehicles are those with the least driving experience. Obviously this makes safety features even more critical.

Accordingly, the AA believes there are three safety features that all vehicles – even entry-level models – should have: ABS, ESC and airbags.

In layman’s terms, Anti-lock Braking Systems (ABS) prevent the wheels from locking up and the car skidding under hard braking so that the driver can still control and steer the car.

Without ABS, a vehicle’s brakes would lock up under hard braking, causing it to swerve and slide before coming to a stop.

Electronic Stability Control (ESC) was first introduced in the mid-Nineties by Mercedes-Benz and BMW. Also commonly referred to as electronic stability program (ESP) or dynamic stability control (DSC), its main function is to detect and reduce the loss of traction and thereby improve a vehicle’s stability.

Simply put, ESC can brake one or more wheels, depending on which ones are losing grip, thereby ensuring the vehicle continues to travel in the required direction.

Airbags first appeared in cars in the late Eighties and have since become the norm rather than the exception.

The number of airbags in a vehicle can be anything from one (in entry-level cars) to as many as eight, but their purpose is the same; preventing injury in case of a collision.

Whether you’re buying a new or used vehicle, it is important to do your homework beforehand.

Although local safety ratings are only available for the five entry-level cars tested by the #SaferCarsforAfrica initiative, most of the vehicles on our market have safety ratings from other markets. Research this online and instead of being dazzled by fancy luxury features, rather choose a car that offers the most safety features for your money.

1921 - Headrests are invented by Benjamin Katz

1927 – Henry Ford introduces the laminated windscreen on the Model T

1978 – ABS makes its debut in the Mercedes-Benz S-Class

Safety ratings should be clearly displayed on vehicles.

Is road safety enough of a priority in SA? 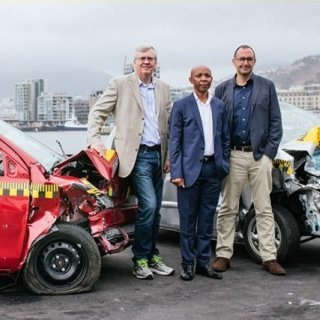